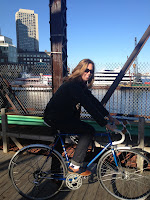 I'm Jessica, a 27 year old Boston native, planning a solo cross country biking tour that will not only take me from state to state but from brewery to brewery. I'll be planning my route with the goal of seeing as many breweries, brewpubs, beer bars, and distilleries as possible, even though this means it'll add a few extra thousand miles to your standard trans America cycling tour.

I want to give back while on this trip. I will be biking in memory of my friend Stirling and riding to raise money for her foundation for osteosarcoma research. I will also be raising money for Bikes Not Bombs, a Boston based bike shop and charitable foundation. You can read more about these on the charities page.

It will be a self-sustained trip, meaning no support vehicles. I'll be carrying all of my supplies as well as a tent and camping kitchen with me to keep costs low and to reduce my carbon footprint. I'll occasionally couch surf and stay with friends.

The Big Trip is slated to begin in May of 2014. I'll be documenting the trip, the breweries, and the beer as I go. When cell phone battery allows, I will keep track of my route and post it when possible, and I will check into beers and breweries using Untappd. There'll be plenty of topics to cover before then, so check back in.

If you have suggestions on breweries to visit, things to see, places to eat or sleep, or just want to send a message, contact me via email.

Why the focus on Craft Beer?
I fell in love with craft beer earlier than most people I know. The year was 1994 when I went on my first brewery tour at Catamount Brewery (later bought by Harpoon). I was 8 years old (thanks Dad!). Instead of giving me beer, they gave me hops and malts to hold for the duration of the tour and at the end of the tour they told me to smell them. I’ve loved beer and have been fascinated by the industry ever since.

I’ve volunteered at over 30 different beer festivals, simply because sampling and talking about beer makes me happy. I lived in Denver for four years and spent that time buying a new six pack every week. It was heaven. I also spent two and a half years in europe, with a large chunk of time in the Czech Republic learning about their famous pilsner and the history of their breweries. My adult years have been shaped by craft beer more than anything else; it's where I found my friends, my jobs, how I chose the cities I lived in, and has steadily remained my greatest passion.

But mixing biking and beer, isn't that dangerous?
It needs to be said that under no circumstances do I condone biking after drinking. Not even while tipsy. I had an unfortunate accident the one time I tried and will never do it again. It is dangerous, irresponsible, and completely stupid. Don't do it.